How to Create More Time: Wendy Yellen Shares Her Secret 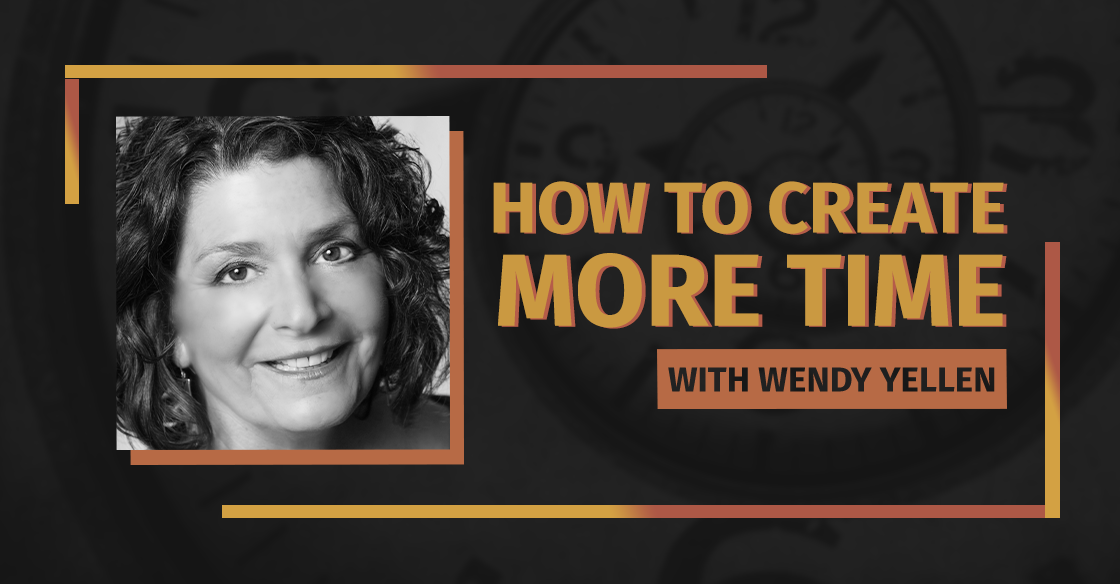 How can you, as a business person, create time? Instead of feeling hurried and pressured, how to create an actual sense that time is expanding – and be able to use that time in an easy, flowing way?

How can you “create more time” when we all have the same amount?

Sound impossible? My clients do it all the time. Here’s a peek into how they do that – and how you can too.

Most people feel like they don’t have enough time. You may feel like you are working as hard – and as fast – as you can. When we do that, we are working from fear or hurry or pressure from so many deadlines. Then, the inner tension in our body, the tight shoulders, the rapid heartbeat, the tight gut all create a feeling that we have to move even faster.

It’s the least effective way to get more done. Everyone already “knows” this. And yet - it feels like the only choice you have.

This becomes an endless cycle and overloads your body and mind until you want to run away screaming or take someone’s head off!

Part of what stresses us about time is we feel an inner pressure to get a lot done and to do it near-perfectly. When your plate is full, and you are working on an important project, often the mind is irritated and worried and runs “hot and bothered” like a train wreck about to happen – speeding forward feeling like you are barely in control. The next 37 items on your to-do list all pop up in your mind, competing for your attention now like baby birds chirping to be fed. Your mind lurches along, feeling massively over-involved and even overwhelmed with all the problems you needed to solve yesterday, and on and on.

All of which means you have inner pressure, inner distraction, and a hurried and harried feeling – PLUS fear and pressure from wanting/needing to create more business or attend to business obstacles quickly.

Of course, none of this is ideal for creating a life and business you love. How could you possibly be creative with so much heat and pressure? The mind just doesn’t work at its best under these conditions.

Click here to listen to Priscilla McKinney and Wendy Yellen dive into Eidetics - the ancient form of knowledge that has been molded to help the modern entrepreneur and business owners find their own personal “ruts in energy” so they can address those issues and operate at full capacity.

How can you work at your highest level – without driving yourself into the ground?

Here’s how “Marianne” used the tool of Eidetics* to stop working 24/7, stop micromanaging her team, hire people who were actually able to do their jobs, finally take time for travel and vacations, taking more time for precious self-care and to be with her friends. All while doubling and tripling her income!

(*Eidetics is a 21st century evidence-based, highly practical inner transformational practice grounded in neuroscience, psychology, leadership and personal development principles used by high performers, athletes and leaders around the world for over half a century.)

“Marianne” and I started with a detailed look at what she wanted, and what she was – and wasn’t - currently doing. Having been highly successful in other businesses, Marianne really did know what she needed to be doing. People often do know or sense what is needed, but over and over and over, like so many people, she wasn’t doing it. And finances were pinching her head in a vice. It terrified her.

We worked with two hidden but primary places where we (inadvertently) trip ourselves up on the way to more success (and more time):

For Marianne, she was pounding herself into the ground with work, taking no time off, not taking care of herself, and drowning in fear about money.

We dug deep into her consciousness to dissolve the barriers of history, the crust over her true and original potentials. We brought her potentials, her deeper knowing, forward. Not through wishing or fantasy or trying to make herself act a certain way. But through consistent Eidetic exposure to her own deeper self, so that her True Nature began to emerge – organically, naturally, and in a way that surprised and pleased her.

And with the newfound ease within herself, Marianne found that the tasks that used to overtake her, the tasks which loomed large, eased so that the inner pressure wasn’t there, the fear, the dread, the concern that it would go “wrong”.

And when that happened? She experienced more time. Because as we get out of our own way – naturally – there are fewer inner obstacles to “get through”, so critical tasks are clearer and we can tackle them with clarity and ease.

The actual tasks may stay the same, but the freedom in our minds is the critical factor in expanding the sense of time.

With Marianne’s expanded sense of time, and much less inner pressure and distraction, she doubled and tripled her business, changed her marketing focus, opened up to ideas which moved her business forward instead of being resistant to them, opened her eyes to what her employees were and weren’t doing, successfully signed on many Fortune 500 type prospects – and yes, even enjoyed all of it.

The cherry on top? People who hadn’t seen her in years told her how much younger she looked. So you know she had been feeling less stressed!

To experience your own inner territory, and begin to open up time, start here (and be sure to check out the last page): www.Myspiritualmanifesto.com/bird. or use code BIRD during checkout.